My aunt lived in a tiny yet clean home in the village of Painganadu, in Tamil Nadu, India. After traveling some 8,400 miles from our apartment in New York City, my husband, two daughters, and I arrived outside, via a black Ambassador taxi, jetlagged and sleepless. My husband, Ram, and I both grew up in middle-class Indian families, and had arranged the trip to help connect our two American-born girls to that nebulous thing called heritage. We planned to conduct Hindu rituals at a temple, just as Ram and I had as newlyweds, and pray for our family’s continued well-being. Crucially, we also planned to stay with relatives. Which suited Ram and me fine. We had come to America as broke college students on scholarship, lugging a sole suitcase each, and gone on to have good careers. Still, at our core, we considered ourselves middle class. Turns out, our two American-born daughters very much did not.

On the ride to my aunt’s, my daughters, ages seven and three at the time (this all happened about 20 years ago), had stared in fascination, and perhaps with some unease, at the stray dogs and water buffalos wandering the dusty streets. When my aunt welcomed us inside, my seven-year-old took one look at the “Indian toilet” dug into the ground and clearly thought nope! “Why can’t we stay at a hotel?” she whispered, turning to me. Shhh, I hissed. Thanks to a divine act of mercy, my aunt didn’t hear the comment. Still, I was mortified, bulldozed by the feeling that I was raising if not brats then something certainly in the neighbourhood. Are our girls growing up in some sort of la-la land? I asked Ram later. The answer seemed to be yes.

Of course, Ram and I hadn’t intentionally raised two hyper-privileged daughters. But we weren’t exactly without fault. After graduating from college and marrying, we landed in New York City — Wall Street for him; journalism for me — and began climbing the ladder of prosperity, the very thing that drew us to North America. My grandmother was a child bride at age 12. My mother didn’t finish college; she had to get married. My father, an English professor, worked and saved for 20 years — 20! — before he could afford a car, a green Fiat. I not only wanted one car, I wanted two, and I didn’t have two decades’ worth of patience. I had come to America in pursuit of the classic immigrant rags-to-riches story, and I was living it. I studied art at Mount Holyoke College, then journalism at Columbia, becoming the first woman in my family to receive a higher education. I launched a successful freelance career. I won fancy awards and fellowships.

By the time I had my second daughter, two months after 9/11, Ram and I were fully ensconced in upper-class NYC life. We bought a three-bedroom apartment in an Upper West Side co-op. We sent our kids to private schools. We spent weekends in the Hamptons and vacationed in Nassau, Aspen, and Bali, staying at nice resorts. Ram and I considered these experiences indulgences, not necessarily our way of life. The problem was that our kids viewed these luxuries as their life — their default. Until my daughter’s hotel comment, however, I had failed to internalize how distinct my upbringing was from theirs, and how our worldviews differed as a result. Can I pass my middle-class values to my children without them, you know, actually living middle-class lives? I wondered. Is that even possible?

As an immigrant, I found satisfaction in the fact that, through diligence and a healthy dose of desperation, I had secured a degree of economic mobility that remains elusive throughout much of the world. And I worried that, in letting my daughters float through childhood in a cloud of privilege, I was doing them a disservice somehow, that I was denying them the gumption they needed to achieve their own financial independence. Many high-achieving immigrant parents grapple with similar concerns, I learned. We want our children to share our ambition and resourcefulness and frugality, but these traits are often rooted in the defining experience of having been hungry, young, and broke — a way of living our children haven’t known. “We tell them not to waste food and talk about starving Indian kids,” the clinical therapist Shanthi Karamcheti told me. “But kids learn from experience, not talk.”

Ram and I, for our part, tried to live frugally, by Manhattan standards anyway. We bought a home at the bottom end of our budget, so that we could live among families who had values like ours. We kept our kids in private schools, yes, but in mid-level ones, instead of Dalton or Trinity, the tony favourites of our friends’. We made them do chores. We didn’t buy the latest, glitziest, exorbitantly priced Christmas toys. As our daughters grew older, we talked with them about wealth, about how fortunate we were.

Parenting is uncomfortable. Its failures stare me in the face. Have I damaged my girls? I often wonder that, but I don’t have an answer yet.

All the same, there came a tipping point. One day, our eldest daughter, still in grade school, came home and shared some news: she’d learned that some parent had rented out the FAO Schwarz toy store — the entire thing — for their kid’s birthday party. Can you even do that? I wondered. The extravagance felt next level. There was surely no way, I thought, that such indulgences would turn a child into an at least quasi-grounded, well-adjusted adult.

So Ram and I said forget it. After much deliberation, we blew up the life we’d built in New York — a city we loved — and moved with our daughters, then nine and four, to Bangalore, India. We hoped that our girls would absorb through osmosis the middle-class work ethic of the people they came in contact with. And they did, at least to a degree — from people like the lady who sold fresh cow’s milk in front of our apartment each morning, or the disabled woman we bought bananas from en route to the bus stop. While volunteering at a local NGO, our girls met slum children and saw the ambition they had to rise above their circumstances.

But did moving to India solve all our problems? Take one wild guess.

After high school, both our daughters attended undergrad back in America. Like many Indian parents, Ram and I felt, and still feel, an urge to push our American-born children into safe, lucrative fields, like medicine or engineering. (Perhaps no surprise that Indians are the wealthiest immigrant group in the U.S.) But we’ve had to learn that ambition and success mean different things to us and them. Our eldest, now 24, is what she calls a “digital nomad,” working as a software engineer as she bounces between U.S. cities. She wants to join a start-up eventually. I want her to get an MBA. I try not to nag her about it. Meanwhile, our youngest, a college junior, recently announced that she might pursue something called subaltern studies. “Before you guys freak out,” she began. “Just look it up, I beg you.” I worry about her, too. I think she would make a good lawyer.

Listen, neither path is one Ram and I would have chosen for our daughters. But we’re trying to stay open. We seek help and see therapists — still a taboo among many Indians. We try to listen to our girls, to be cool, even though we know it’s usually pathetic when parents try to be cool. Still, we’re trying.

What’s interesting is that, after spending the past two decades trying to impart my Very Respectable Values on my daughters, they’re now doing the same to me, having gained principles from their upbringing that I hadn't anticipated. They’ve patiently explained, for instance, that it’s okay to value a healthy work-life balance over brute-force ambition, that it’s fine to say that you are clinically depressed or otherwise struggling, that it’s good to take time off to find yourself. Maybe they have a point.

Parenting is uncomfortable. Its failures stare me in the face. Have I damaged my girls? I often wonder that, but I don’t have an answer yet. For now, they seem okay. Time will tell whether the middle-class values we tried to instill in them will hold, or even prove useful. Not long ago I asked my youngest what she wanted for her 20th birthday. She had been talking about buying Air Jordans for years. “But they cost a ton of money,” she always says. “Plus, you have to bid on them.” Is that frugality? I’ll count it. 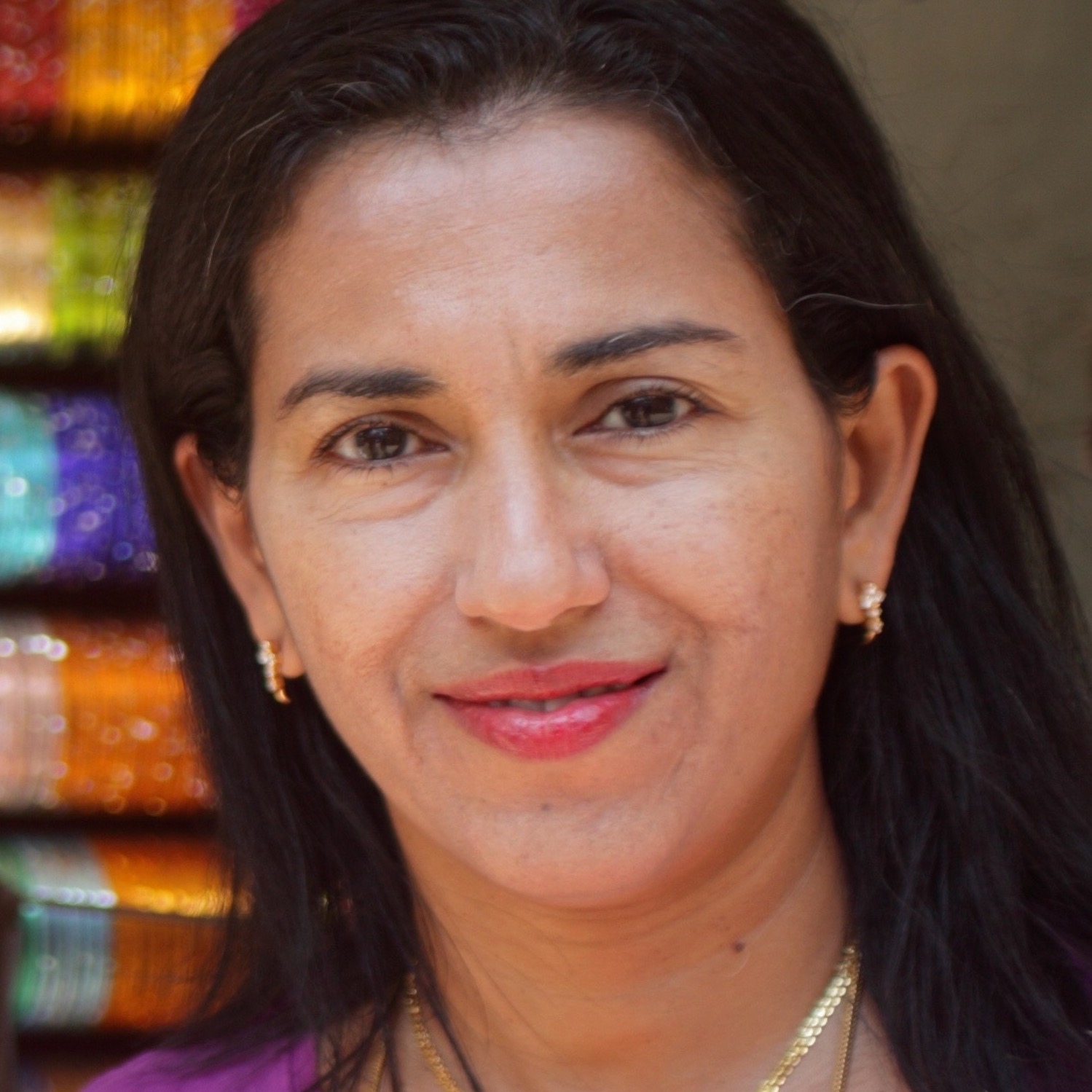 Shoba Narayan is the author of five books, and the recipient of a James Beard Award and a Pulitzer fellowship. A journalist for over 30 years, she is currently the host and anchor of Bird Podcast and the overseas correspondent for Radio New Zealand. She enjoys wine, studies Jung, and is a gadget geek.