As you may know, trading in non-fungible tokens — aka NFTs — has been the focus of intense interest of late. There’s been tons of speculation, froth, and signals of a wild new future, or maybe just signs of a deranged present, depending on your perspective. We won’t go into detail; just know that an NFT of a clip-art rock recently sold for about $1.3 million, and a pixelated tulip is now listed for $3.5 million. It’s a whole thing.

So it’s not surprising that some corners of the internet were amused this week to read a Reddit post by a 31-year-old crypto neophyte describing how he proposed to his girlfriend with an NFT in lieu of an engagement ring. The poster, HandHoldingClub, said that after having blown much of his life savings on Dogecoin (which lol in itself) he spent what was left on an NFT with “significance” to him and his girlfriend, confident that “she would love [it].” Because what better way to say “you complete me” than with a speculative investment in a digital representation of an object that could possibly become worthless but could also not.

What better way to say “you complete me” than with a speculative investment in a digital representation of an object that could possibly become worthless but could also not.

The proposal went about as well as you’d expect, in that it went terribly.

In case you missed it, here’s the story HandHoldingClub posted (which has since been deleted). It’s really worth taking a few minutes to read, because it’s a true gem. 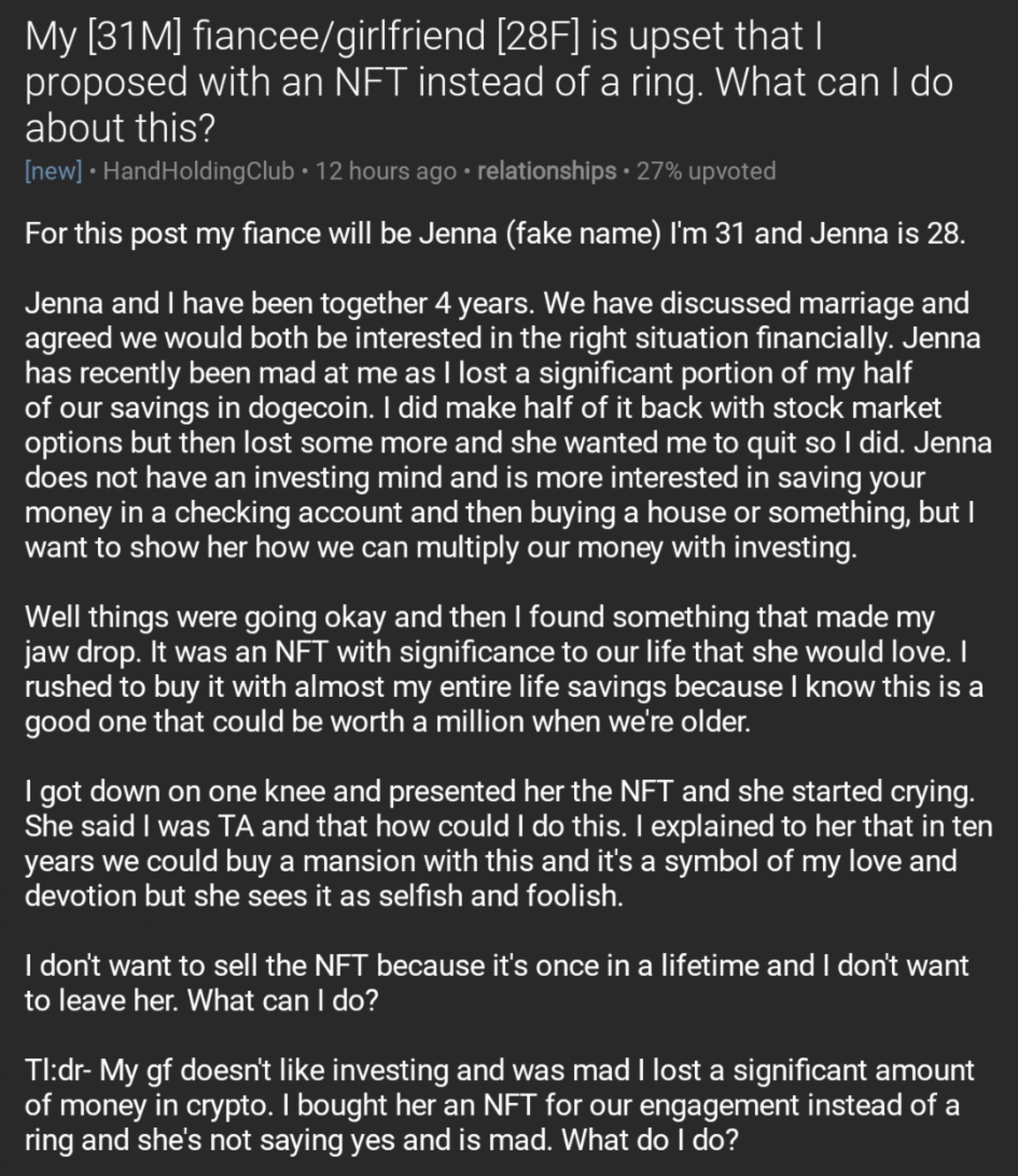 So, OK. The post became a trending item on social networks (a screenshot was widely tweeted). Some people doubted the story’s legitimacy, while others had zero problem accepting that a guy would possess such profound thickheadedness. “I can't believe she wasted four years of her life with someone who proposed with magic beans,” @kitsonpaws wrote.

Well, here at Wealthsimple Magazine, we pride ourselves on both getting to the bottom of important capital-J Journalism stories and understanding how new financial technology is shaping our world. So we decided to dig in and figure out what, if anything, about the story was true. We won’t disclose how we researched HandHoldingClub (OK, we sort of will: we spent an hour or two reading through his Reddit posts and Googling around and voilà) but we did manage to reach him by email. He declined to give an interview. But he did agree to let us write about our email conversation, as long as we did it anonymously. (Smart move, HandHoldingClub!)

Below is the response he sent by email, which tells the whole (non) story.

I wrote that story as a joke. I deleted the posts before you reached out, but you might have seen some comments pointing out flaws and inconsistencies as they searched my profile for previous posts. It sounds a little less funny now, but some of the replies such as "lmao this can't be real" picked up on the humor.

I think the story still has some interesting elements and wouldn't have garnered so much attention if people didn't have a realistic reaction to it. There's definitely something there if you're considering writing on the topic. Unfortunately I don't have any details to provide about it as it never happened.

I would prefer this stay anonymous as the events did not take place and might confuse my friends and family and I do look quite the fool. While I may be foolish enough to tell tall tales on reddit, I would never behave that way in a relationship.

I wish you the best in your journalistic endeavors. I'll be checking out more of your work.

J.R. Sullivan is an editor for Wealthsimple Magazine. He’s also writing a book for Knopf about the Kingston coal-ash disaster.